Lyme disease is often evident by a rash on the skin, but infections do not always produce similar rashes. This can make it difficult to detect the disease early, when antibiotic treatment is most effective. In today’s issue of the Biophysical Journal, published by Elsevier’s Cell Press, researchers describe a new mathematical model that captures the interactions between disease-causing bacteria and the host immune response that affect the appearance of a rash and the spread of infection.

“The findings are important because they connect how the rash looks with the behavior of the bacteria in our body,” said the researcher of Physics and Cellular and Molecular Biology at the University of Arizona in Tucson. The research team developed a fairly simple mathematical model that can account for the growth and appearance of a Lyme disease rash and might be used to predict the densities of the disease-causing bacteria in relationship to the rash as a function of time during spreading.

In many cases, patients with Lyme disease develop a rash with a bull’s-eye appearance. The model reveals that in these cases, the rash begins as a small and uniform rash. Activation of the immune response is strongest at the center of the rash and clears most, but not all, of the bacteria from the center within about one week; however, bacteria at the edge of the rash continue to spread outward, further activating the immune response away from the edge. Therefore, the rash grows, but the center becomes less inflamed. As time progresses, though, the bacteria re-surge at the center, leading to the characteristic bull’s-eye pattern. 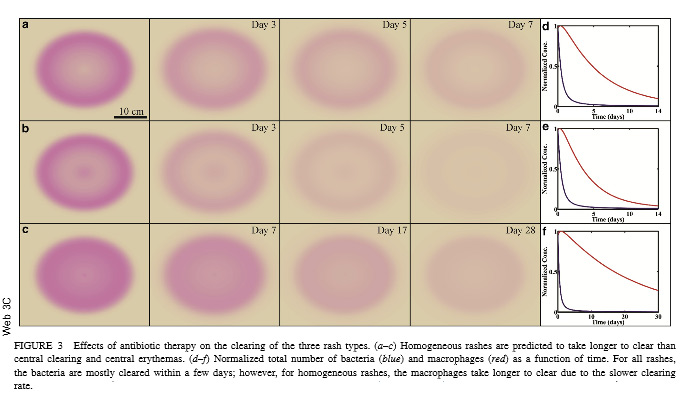 Dynamics of the Lyme disease rash

By revealing that the bacteria and immune cell populations change as a rash progresses, the model may help guide Lyme disease treatment. “The model that we have developed can be used to predict how the bacteria move through our bodies and how they are affected by therapeutics,” explained the researcher.

To that end, the researchers simulated the progression of different rash types over the course of antibiotic treatment. They found that for all types of Lyme disease rashes, bacteria were cleared from the skin within roughly the first week; however, the dynamics of disappearance of the rash varied depending on the type of rash with which the patient presented. For example, while bull’s-eye rashes resolved within a week of treatment, uniform rashes tended to be present even after four weeks, likely due to prolonged inflammation. Such differences suggest that there may not be a one-size-fits-all treatment regimen for resolving Lyme disease and its effects on the body. The researcher also notes that there are a number of similarities between the bacterium that causes Lyme disease and the bacterium that causes syphilis, and that “therefore, it is likely that this model will also be applicable to understanding syphilis, as well as potentially other bacterial infections.